What is fine dust?

What is fine dust?

Fine dust – tiny particles of natural or industrial origin that can be harmful for mankind and the environment. Fine dust also represents a challenge in the semiconductor industry, for which DAS Environmental Expert GmbH offers constantly evolving solutions that have been tried and tested over many years.

What is fine dust and why is it a problem for people and the industry?

Dust consists of solid particles that stay suspended in the air for a certain period of time. These particles can be made of organic (e.g. bacteria, fungal spores, wood, flour) or inorganic (e.g. mineral fibres, glass, stone) materials. The microparticles that fly around in the air are respirable, that is, they are small enough to enter the human body and settle in the lungs or even enter the bloodstream. This can have serious consequences for our health. Fine dust, and the right way of dealing with it, is therefore a core challenge for the industry and the environment.

Sources and properties of fine dust

On the one hand, sources of dust can be natural processes, such as volcanic activity, erosion, storms, sea surf, pollination or forest fires. However, a significant proportion of the dust pollution in the atmosphere is caused by anthropogenic dust sources, such as traffic, agriculture, energy production and industrial processes. Primary fine dust is released directly where it is created; this is the case with combustion processes. Particles that are formed at a later stage from gaseous precursors such as sulphur and nitrogen oxides, hydrogen sulphide, ammonia or volatile organic hydrocarbons, through chemical reactions and/or accumulation in a condensation core, are referred to as secondary fine dust.

Dust particles are classified in different categories according to their size. This dates back to the National Air Quality Standard for Particulate Matter (PM Standard for short) introduced by the US Environmental Protection Agency (EPA) in 1987. Similarly, DIN EN 12341:2014 defines fine dust of the PMX category as “Particulate matter that is suspended in ambient air, and which passes through a size selective sample inlet with a 50 % efficiency cut-off at an aerodynamic diameter of x µm (micrometres)”. 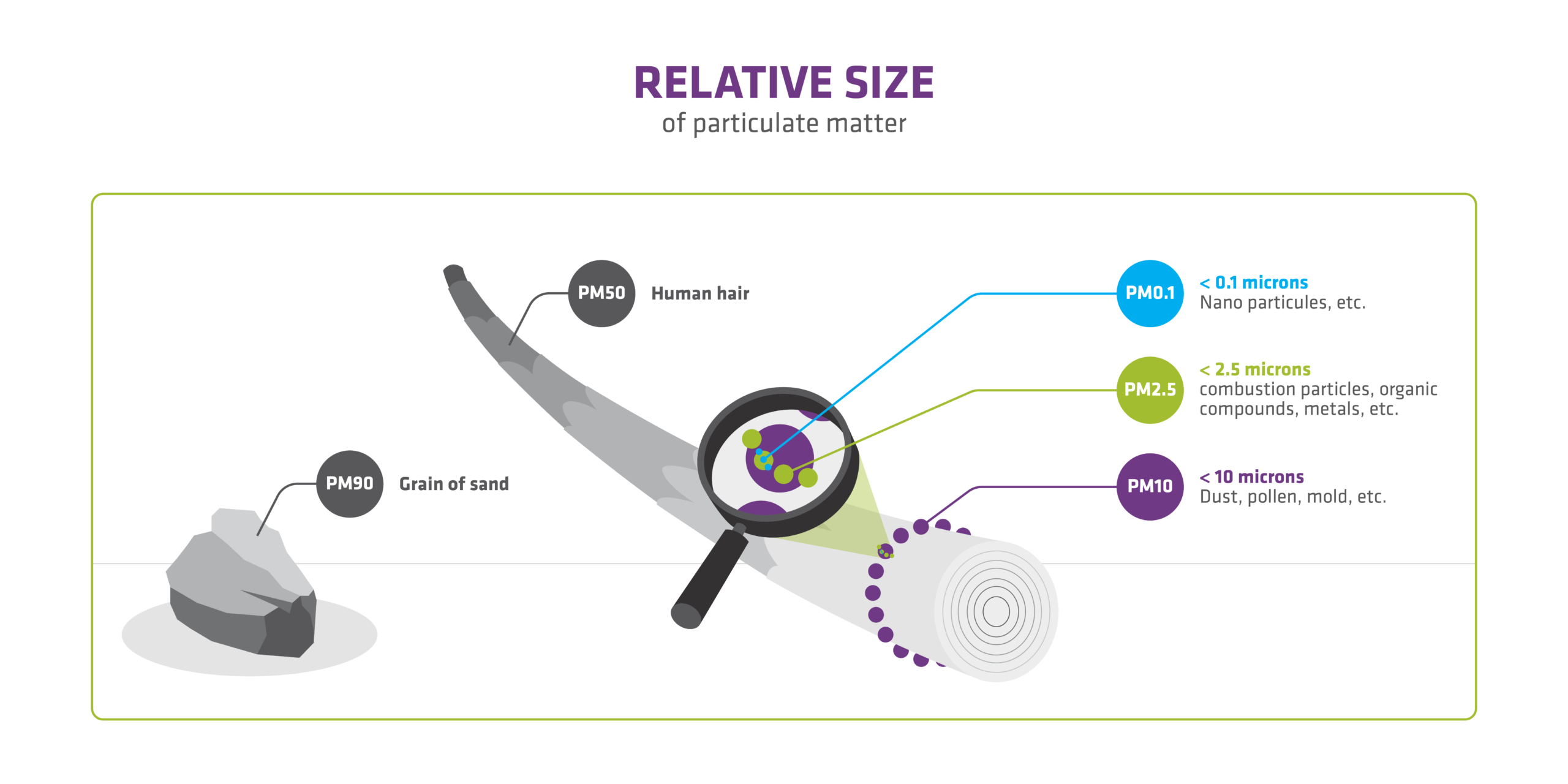 From the point of view of health, the size and type of dust particles, and the pollutant content of the specific dust, are the key criteria. While coarse particles (“coarse dust”) are captured by nose hairs and the mucous membranes of the nasopharyngeal cavity, fine dust particles are inhaled through the airways, and reach the lungs.

Fine dust in the PM10 category corresponds to what is known as the thoracic fraction in the EN 481 and ISO 7708 standards. These particles reach the upper regions of the lungs. Smaller dust particles in the PM2.5 category – also called the alveolar fraction – are transported through the trachea and the bronchi into the deep regions of the lungs, where the ciliated epithelium is less thick, which makes it harder for the respiratory organ to purify itself. This also includes the ultrafine particle fraction (PM 0.1, size < 0.1µm); it is believed that these particles even enter the bloodstream through the alveoli.

The smaller it is, the more dangerous it is: The effects of fine dust on people and the environment depend on the size of the particles and how deep they penetrate, as well as on their chemical composition. Dust particles can contain substances such as lead or mercury. Moreover, further pollutants such as hydrocarbons, or sulphur or nitrogen compounds, can be deposited on the surface of dust particles. Fine dust has an impact on health: it can cause or exacerbate respiratory diseases, such as bronchitis, chronic obstructive pulmonary disease (COPD) or asthma. 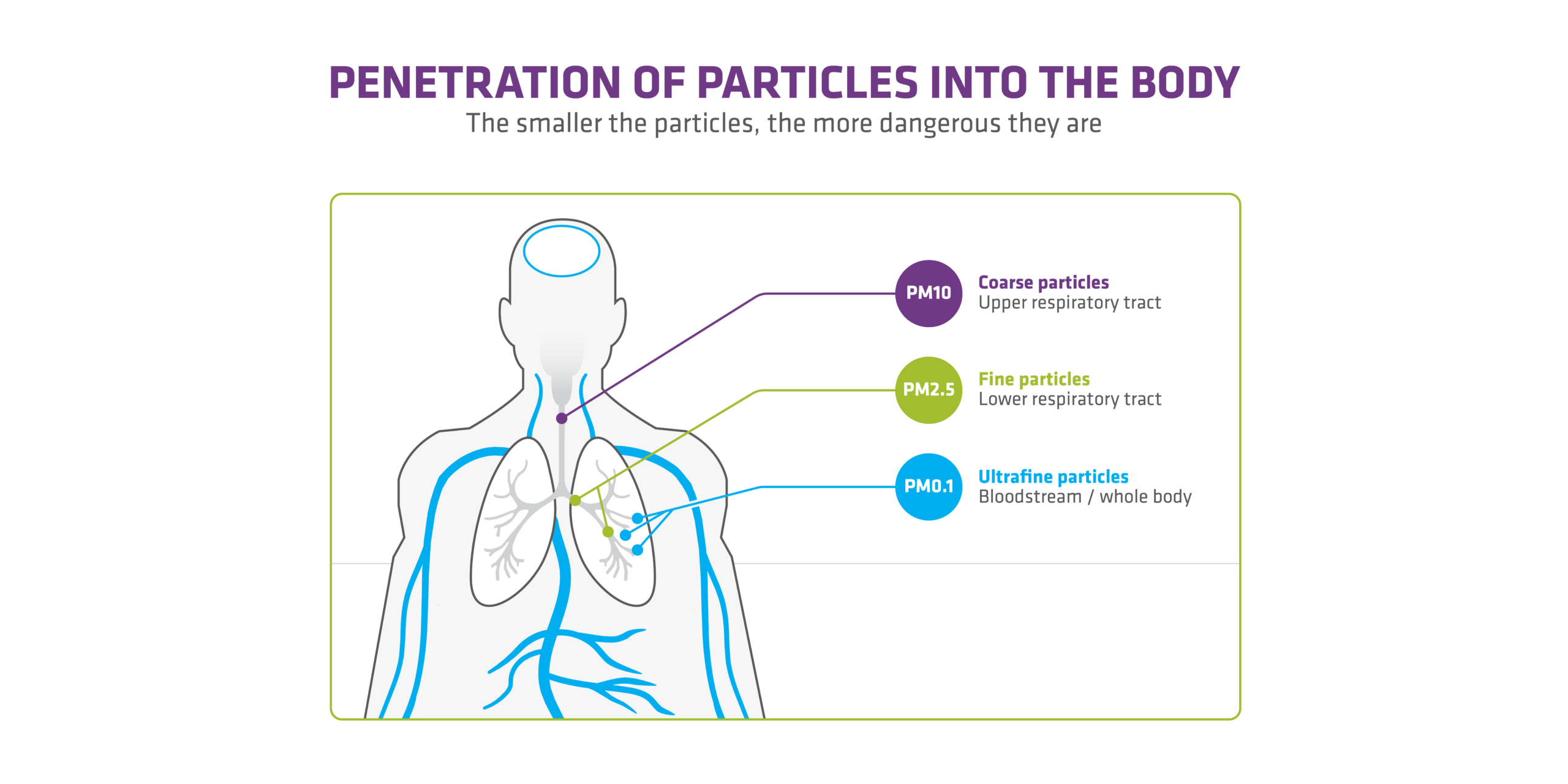 According to the WHO and the European Environmental Agency, health effects range from mucous membrane irritation and local inflammation in the trachea and bronchi or alveoli, through to increased plaque formation in blood vessels, an increased risk of thrombosis or changes to the regulatory function of the autonomic nervous system (heart rate variability). Ultrafine particles are smaller than 0.1µm; they are also suspected of causing cancer and inflammations that inflict lasting damage to the cardiovascular system.

Due to these health risks, the past few years have seen international efforts to reduce levels of fine dust in the air. Further strict occupational health provisions apply to employees in risk sectors, such as mining or foundries. Indeed, when workers are exposed to dust and inhale it at their workplace over a long time, this can cause severe health problems such as silicosis, pulmonary fibrosis and lung cancer. For this reason, there are occupational exposure limits for particularly dangerous dusts. In addition, most countries have introduced legislation on maximum fine dust emission values. In Europe, for instance, the daily maximum limit for the PM10 fine dust fraction has been set at 50 µg/m3 since 2005. This limit must not be exceeded more than 35 times a year, whilst the permissible yearly average is 40 µg/m3. For PM2.5 particles, a binding limit of a yearly average of 25 µg/m3 must be adhered to throughout Europe since 2008. The maximum limits recommended by the World Health Organisation in its WHO air quality guidelines are significantly lower. Fine dust emissions in Germany have decreased significantly since 1995, according to the German Federal Environment Agency. Thus, PM2.5 emissions have been successfully reduced from 0.22 million tonnes (Mt, 1995) to 0.10 Mt (2018).

Fine dust in the industry